skip to main | skip to sidebar

Graduate school is often expensive and assistantships designed to support attendance are often far below levels that provide livable compensation. Graduate students are forming unions to make their case for improved conditions and compensation. Both domestic and international student stand to gain from joining together.
Posted by Denny Roberts at 6:06 AM No comments:

How international students in U.S.A. can obtain internships

With practical training being a high priority for many international students, staying after graduation from their U.S.A. institutions is important. Leah Collum offers advice on how to obtain these coveted placements.
Posted by Denny Roberts at 6:03 AM No comments:

NYU now has a civics requirement for Chinese students at its campus in Shanghai. East China Normal University, the partner institutions for NYU, will develop and provide the course. The course requirement will allow graduates to qualify for both Chinese and NYU diplomas.
Posted by Denny Roberts at 6:01 AM No comments:

The latest "Open Doors" data reflect a continued decline in international student enrollment in the U.S.A., although the decline slowed from the previous couple of years. The number of U.S. students who study abroad showed increasing numbers with the destiny countries remaining primarily in Europe.
Posted by Denny Roberts at 5:38 AM No comments:

The Association of American Universities recently considered building its own metaphoric wall to the north in retracting membership to the prestigious group for two Canadian universities - McGill University and the University of Toronto. Philip Altbach and Liz Reisberg ask the question if U.S.A. educators are withdrawing from cross-border partnerships, a move that would be one more step toward isolation. Higher education in the U.S.A. positions itself as the world leader in scholarship and innovation which is accepted by many educators and consumers. However, isolation and protectionism results in cutting off the opportunity to both model and learn from others.
Posted by Denny Roberts at 5:46 AM No comments: 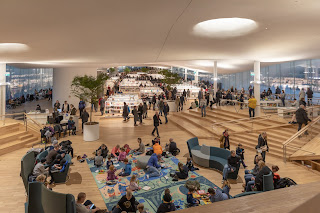 With the rise of self-interest first as a primary focus in business and governmental affairs, it's difficult to figure out where the idea of "community" is headed. Is it headed toward stark nationalism and regionalism or is there a way that citizens can fulfill their personal needs in ways that protect and even deepen a sense of community?

Finland's national library in Helsinki is bucking isolation by providing a facility "to bring people together and raise them up educationally and culturally." Helsinki's Executive Director for Culture and Leisure calls the library a "citizenship factory." Faced with the choices of slipping further into "racism, separatism and fear" Fins chose to "...buck it, doubling down on universalism and inclusion by building a monument to the idea that everybody is worth respect."
Posted by Denny Roberts at 5:51 AM No comments:

In a move interpreted as reflecting a return to conservative Islam, the Turkish government is looking at implementing more gender segregated higher education institutions. Educators in Turkey have expressed alarm that government officials have met with educators in Japan to look at segregated gender education that has been in place there since the 19th century. Comparing 19th century Japan, when gender segregated institutions were introduced to expand educational opportunity for women, and the environment of 21st century Turkey raises the question of the appropriateness of policy transfer in education across cultures and centuries.
Posted by Denny Roberts at 7:24 AM No comments:

There is little surprise to a University of Washington research study on the impact of discrimination on students daily activity. The bottom line - experiencing discrimination based on national origin and ancestry, gender, disability, or sexual orientation was tied to "increased feelings of frustration, loneliness, anxiety, and depression." Although the research did not explicitly address the discrimination and marginalization international students experience, it's obvious that the negative impact would be the same.

Although the University of Washington study was limited to students in STEM areas, the implications might be generalizable. An issue that is particularly important is identifying conditions that support students when they face discrimination. This study found that students "who displayed high resilience and had strong social support were least likely to display indicators of anxiety and depression, no matter how many incidents of discrimination they reported."
Posted by Denny Roberts at 6:23 AM No comments:

The creation of a deep commitment to academic freedom in China continues to be elusive. The New York Times reported how students' reports have resulted in discipline of faculty in Chinese institutions. This example demonstrates how students may lack an understanding of why academic freedom is important and how they can (or should), themselves, learn to dialogue with others with whom their political or ideological ideas differ.

Students have also become the target of Chinese government surveillance. A Chinese student at the University of Minnesota was sentenced to six months in jail for Tweets that were perceived to be critical of the Chinese government. Kris Olds, a professor at the University of Wisconsin, was reported in an Inside Higher Education article as asking, "What obligations do our universities have to provide our arrested students & their families, in cases like this, with resources for legal support & broader political support in relevant contexts here & around the world?... What is the role of formal and informal associations of universities in responding to this phenomenon, recognizing that many universities do not  have the scale of legal and area studies resources that the University of Minnesota does(?)"
Posted by Denny Roberts at 7:49 AM No comments:

It comes as no surprise the money is a frequent focus of conversation in relation to internationalizing higher education in Europe, as it does elsewhere around the world. A recent EIAE study indicated that only 12% of respondents throughout Europe see funding as a major concern. However, it is more important in countries such as the U.K. And, the availability of funding was identified throughout Europe as among the "top three internal and external challenges affecting internationalization in their institutions."

Following budget concerns, other key challenges for European educators striving to advance an international perspective include: lack of commitment by colleagues, lack of recognition by HEIs of those working toward internationalization, competition, and national legal barriers.
Posted by Denny Roberts at 7:43 AM No comments:

Denny Roberts
Illinois, United States
I maintain two blogs - Pursuing Leadership by Denny (my emerging ideas and book reviews related to leadership) and Global Student Affairs (issues and resources for internationalization of higher education). These blogs offer insight into my views and are essential tools in my ongoing writing and consulting, pursued after almost 50 years in higher education in the U.S.A. and Qatar. I am an advocate for quality education and its transforming impact on student learning.