skip to main | skip to sidebar

As higher education around the world seeks to maintain or increase international student numbers, partnerships and opportunity may tip the scale.

In a paid ad for the Chronicle of Higher Education, former ambassador Asif Chaudhry and now Vice President for International Programs at Washington State University indicated that visa processing is already very thorough, despite the Trump administration's Executive Order assertion. He also said that, "it is very much in our national security interest to have students from other countries come to the United States and interact with our students. These students come to understand who we are as Americans. They take that message and positive experience back to their countries." In order to counter the potential decline of international student numbers, Washington State University turned to INTO to help them gain greater visibility among international student applicants.

Canada and Australia have turned to policy changes that relax visa processing, work rules, and pathways to citizenship in order to continue to increase international student numbers. Taking advantage of strong student evaluations (89% approval in an international student survey) and growing visibility among higher education institutions around the globe, Australia has now topped 550,000 international students. It recently published a "10-year plan for expanding Australia's global role in education, research, and training" which offers employability as one of its benefits.

Beyond these strategies, many universities have used agents to recruit larger numbers of international students. This practice has been frequently criticized as serving the institutions that pay fees to agents rather than acting in the best interest of applicants. Because of this potential negative impact, the U.S. Middle States accrediting body is exploring the possibility of prohibiting use of agents among institutions it accredits.

International students often use web sites to help them determine what institutions they want to attend. Taking an audit of how the material on a web site would be seen by a prospective international student will increase the likelihood of applicants and admits. Instagram may also be a technology platform that should be included in institutional recruitment strategies.
Posted by Denny Roberts at 5:58 AM No comments:

When will promise of internationalization be fulfilled?

Educators in the U.S.A. have encountered a harsh reality related to discourse - it's hard to talk across political and ideological barriers. The rise in protests in reaction to various U.S.A. governmental moves as well as demonstrations related to campus speakers in some ways is a sign of greater activism. On the other hand, some of the protests have descended into acts of violence or silencing other's voices.

Liz Reisberg proposed that growing internationalization should have resulted in students becoming global citizens who could handle divergent discourse more comfortably. However, she points to the obvious - study abroad is part of few students' experience and international students in the U.S.A. are often isolated from domestic students. Add to this that internationalization on most campuses is not deeply and comprehensively implemented and we see why internationalization may not be resulting in graduates having a tolerant and informed view of the world.

Reisberg asserts, "I think the same attitudes and inclinations that we hope to develop in 'global citizens' are the same attitudes and inclinations we need in 'domestic citizens' in order to live 'civilly' on campus and in the larger society." Add to this the fact that employer priorities for new hires include "intercultural skills and understanding of societies and cultures outside the U.S." and it is easy to see how awareness and respect across domestic and world cultures isn't just a worthy educational goal, it's a business imperative in the 21st century.

Posted by Denny Roberts at 6:53 AM No comments:

Amid the continuing uncertainty about the Trump administration's restriction of visas, Canadian universities are experiencing 20% and higher increases in applications. Some of the increases are from other North American countries such as the U.S.A. (80% increase) and Mexico (63%). The numbers for other countries are increasing (59% increase from India), with Indian business students in particular considering Canada in greater numbers.

While net increases in the number of students who enroll in Canadian universities is still on the horizon, the contributing factors beyond the "Trump effect" may include a weak Canadian dollar and the recent revision of its "Express Entry" criteria, offering more points toward visa approval to internationals who graduate from Canadian higher education.

While Canada positions itself with the aid of Prime Minister Justin Trudeau who talks openly about strength in diversity and openness to trade and people, U.S.A. President Trump continues with statements and policies of "America first" and denigration of diversity.
Posted by Denny Roberts at 5:38 AM No comments:

Access to internet may impede recruitment of Chinese students

The internet is restricted more in China than any other country in the world, a condition that may make it difficult for prospective Chinese students to get information they need about higher education opportunity outside the country. The "Great Firewall of China" stands in the way of both students and their families who seek opportunity elsewhere when the number of seats in Chinese institutions does not match the demand.

With 520,000 Chinese students presently studying in the U.S.A., 68% of the top-25 institutions that host them have blocked recruitment/admission content when prospects conduct their internet searches. The blocks have driven some institutions to move their recruitment messages to Chinese specific web sites and social media, often providing text in local languages (especially useful for family members). With the ambivalence created by the Trump administration, reaching Chinese and other international students through social media is essential.
Posted by Denny Roberts at 6:59 AM No comments:

Russia is striving to enhance its prominence and influence by offering more international students opportunities to study in its institutions. This soft power strategy yields little if any revenue for Russian institutions, as is the case in the U.S.A., U.K. China, France, and Australia. The purpose is to attract more students from former Soviet Union countries, enhancing influence in these countries, as well as to include the international student numbers in reporting that will help Russian institutions improve their international rankings. Sixty-nine percent of the 283,000 international students included in the most recent report were from former Soviet states. With soft power and talent development central to Russia's strategy, many students who have graduated from Russian universities bemoan the lack of work opportunities after graduation.
Posted by Denny Roberts at 12:13 PM No comments:

Applications from international students to U.S. are down

Although international student applications in the U.S. are down for fall of 2017, the winter/spring of 2017 saw a 1.7% increase overall to a total of 1.18 million internationals.

The continuing uncertainty regard the Trump administration's Executive Order on travel of internationals appears to be a likely cause for applications being down in 40% of U.S. universities. The most hard-hit are the six targeted Muslim-majority countries specified in the the most recent update of the Executive Order but ripples are seen elsewhere - China and India in particular. While shifting economic conditions may be partially responsible for the drop among Indian applicants, the primary causes identified for the overall decline include:


A subsequent article by Elizabeth Reddin of 300 institutions and published April 4, 2017, confirmed that approximately 40% of U.S. institutions are currently down in international student applications.

The issue at hand is not only the lost revenue from international students coming to the U.S. Of perhaps greater concern is the contribution international students make to healthy and diverse campuses as well as the loss of talent for research and workforce development.
Posted by Denny Roberts at 10:35 AM No comments:

The controversy spawned by President Trump's unfortunate diplomatic blunder in speaking to Taiwan government officials soon after his inauguration has deep roots. Those roots are exemplified in the fact that approximately one-half of Taiwan's universities have signed pledges that Taiwanese institutions will not discuss "one China" as part of the education that mainland Chinese students encounter during their study in Taiwan. The "one China" view holds that Taiwan is part of the larger expanse of continental China.

The pledge not to discuss "one China" serves everyone - it clearly communicates that Taiwan institutions will not include ideologic indoctrination like that required in China. Pledging not to discuss the topic also results in Taiwan being able to avoid the uncomfortable conversation of the degree to which they are or are not politically Chinese, a belief strongly embraced by citizens of Taiwan who come from many different countries and cultures throughout Asia.
Posted by Denny Roberts at 12:06 PM No comments:

Leveraging university and technology to save cities

The "Smart Cities" movement has been around for some time and truly smart cities are actively seeking to link their higher education sector with "city development that specifically focuses on technology-based systems and services." Summarizing the Knowledge Management and E-Learning: An International Journal special issue on "Smart cities of the future: Creating tomorrow's education toward effective skills and career development today" (Vol 6, No 4, 2014), smart cities utilize "technology as a critical enabler to solve rising urbanization issues and improve the cities' environments." 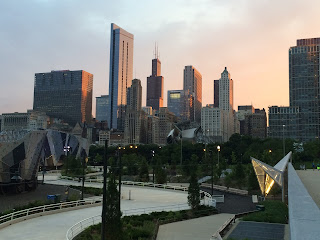 The approach in many U.S. cities is to link the need for a highly educated workforce with growth in the actual number of jobs. Chicago is identified as one of the cities achieving success by linking higher education and business "to ensure that its citizens are motivated, and enabled, to be a driver for these innovations." The Chicago approach links career and technical education to create a pipeline from high school to university to employment.

With Chicago suffering from negative publicity related to gang-related shootings over the last several years, it could provide a compelling example of change. South and West side citizens have repeatedly pointed to the systemic issue of poverty that results from poor job opportunity, a fundamental challenge that could be addressed by a smart city focus coupling education to technical training with a job as the reward. Having two of the top-100 ranked institutions in the world resulted in Chicago being placed No. 8 in the world in providing a base for elite institutions. Numerous other colleges and universities are available throughout Chicago and its suburbs that, when linked with emerging technology opportunity, make it potentially one of the best places to study in the U.S.A. as well as the world.

Chicago is only one of several cities throughout the world (including Barcelona, Amsterdam, Stockholm, and Yokohama) striving to create smart cities. With these cities already seeing success, India has committed to creating 100 smart cities by 2020, an initiative sure to help India in its rise to global prominence. One can only hope that the efforts in India will result in many more educational and work opportunities for its citizens, creating the kind of thriving educational opportunity envisioned in Chicago and elsewhere.
Posted by Denny Roberts at 8:09 AM No comments:

Denny Roberts
Illinois, United States
I maintain two blogs - Pursuing Leadership by Denny (my emerging ideas and book reviews related to leadership) and Global Student Affairs (issues and resources for internationalization of higher education). These blogs offer insight into my views and are essential tools in my ongoing writing and consulting, pursued after almost 50 years in higher education in the U.S.A. and Qatar. I am an advocate for quality education and its transforming impact on student learning.